In 2021, Littlestone Golf Club in Kent became a Toro Total Solutions customer by upgrading its fleet with Toro machinery and investing in a Toro Lynx Central Control irrigation system. Now it has safeguarded its machinery investment by signing up to Reesink’s ReeAssure Gold maintenance scheme for the all-round perfect deal.

Head greenkeeper Chris Barnard says: “There were plans to alter the courses by redesigning the bunkers with the help of architects and building new tees, and the timing of that fitted well with upgrading the irrigation system as well as requiring a sturdy, multi-functional fleet to make things as quick and efficient as possible.”

With so much to do and a new 23 machine deal including cylinder mowers, rotary mowers, aerators, topdressers, sprayers and utility vehicles, the Club subsequently added the ReeAssure maintenance and servicing scheme to the deal to look after the entire fleet of new and old machines.

Chris says: “With all the maintenance the team was taking on that occupied a lot of their time, coupled with not having a specialised mechanic or indeed staff trained in specific areas meant we were only able to deal with basic things and not with repairs or replacements. That would require outside help and that’s where Reesink came in.”

The Gold plan includes unlimited visits, covers all breakdown and call-out costs, only uses Toro genuine parts and covers all electrical components. Reesink’s South East Sheffield Park branch is providing the support and Chris has nothing but praise for the service so far.

He says: “They’re very helpful, we just need to give them a call and they’ll be there. They know what they’re talking about, know the machines inside out, and can find the problem right away whereas it would take us much longer to do so. Since most of the Toro machines now have new technology, they also require a bit more knowledge to fix. The Reesink guys will have it figured out in 15 minutes or less just by using their laptops. It’s so much easier to delegate that to them so we can focus all our work on the courses.”

Knowing the quality the brand offers in its machines, the club chose to invest in its irrigation products opting for the Lynx Central Control system for its upgrade. The irrigation system optimally manages water and resources through a convenient app and is currently being installed.

“It’s an exciting thing to be at the club, looking at it with a fresh pair of eyes and making a difference,” Chris concludes. “Hopefully, with the help of Reesink, we can now focus on all the planning we have going on and getting the work done faster knowing everything else is taken care of.”

Call 01480 226800 or visit our website to find out more about Reesink ReeAssure maintenance plans. 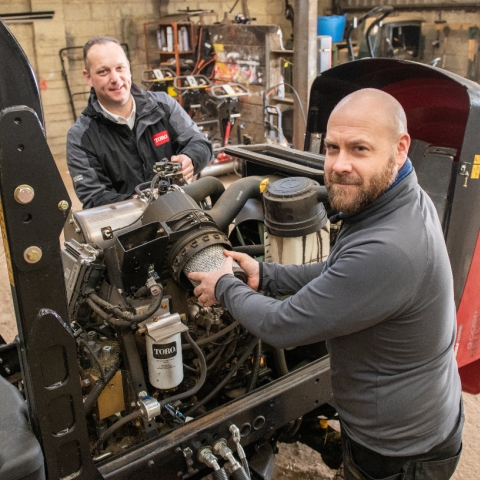 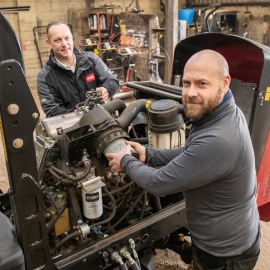 Chris Barnard from Littlestone Golf Club (right) and Peter Biddlecombe from Reesink, working on the Groundsmaster 4500-D.
View all news
SIGN UP to our eNews bulletins and receive a FREE gift