Gullane Golf Club in Scotland and Toro certainly have history. With the latest deal taking it to 25 years, it’s a partnership claimed to have produced putting surfaces as close to perfection as nature will allow.

That accolade was made about the effect of the Greensmaster TriFlex Hybrid 3420 mowers on the course for the Scottish Open three years ago and with a new machine in the club’s last order, clearly the Toro effect continues.

“Toro gave us the attention to detail to create near-perfect conditions. It always has, and it’s why this latest deal takes our relationship to a quarter of a century,” says course manager Stewart Duff.

With three 18-hole courses, Gullane No. 1 carved into ancient links turf, Gullane No. 2 sweeping down to a nature reserve, and Gullane No. 3 with views across Aberlady Bay to the Firth of Forth and beyond, it’s no wonder the club is regarded as one of the most picturesque golf spots in the world. And with a state of the art short game practice area, driving range and children’s course as well, Toro certainly has a lot of area to cover when it comes to maintaining the course. Helping with that is the Groundsmaster 4700-D, which is a like-for-like replacement in the last order from Toro distributor Reesink Turfcare.

Stewart explains: “We split our Toro fleet between the courses as we have so much ground to cover, but there are a couple of machines we use across all three; the Groundsmaster 4700-D is one of those machines. With a cutting width of 12.5ft alongside a high-powered engine it’s incredibly productive.”

And it certainly gets put to good use at Gullane, says Stewart: “In the growing season we have the machine in use five days a week across all the courses, doing three times the amount of work compared to our machines that just work on the one course. So the 4700-D that we had in our last fleet for four years, actually did the equivalent of 12 years’ worth of work – but even then, it was still going strong when we signed the new agreement.”

Joining the Groundsmaster 4700-D and the Greensmaster TriFlex Hybrid 3420 mowers in the last fleet purchase was the Toro Workman utility vehicle and ProPass 200 topdresser.

Stewart continues: “We’re constantly looking at small tweaks we can make in order to get the best possible results and improve the courses for all, and Toro plays a big part in that. For example, we opted for the two Reelmaster 3550-D fairway mowers as the smaller sized cutting units allowed us to follow the contours better, which results in a better quality of cut. The slick tyres on the machines also prevent any turf damage when turning.”

Included as part of Gullane’s tournament support fleet in 2018 were Toro’s GTX electric utility vehicles and they certainly impressed Stewart with him saying at the time he’d be changing his utility vehicles to be Toro based on his positive experience. The arrival of three Workman utility vehicles in the last order sees Stewart true to his word and it sounds as though Toro will be around for many more years to come at Gullane.

Stewart concludes: “The team and I are delighted to have Toro here at the club for another five years; although realistically that’s more than likely going to be another 10 years. We really do feel as though we have the best possible machinery for the courses and with a club that wholeheartedly supports that relationship, I can only see us continuing to invest in Toro in the future.” 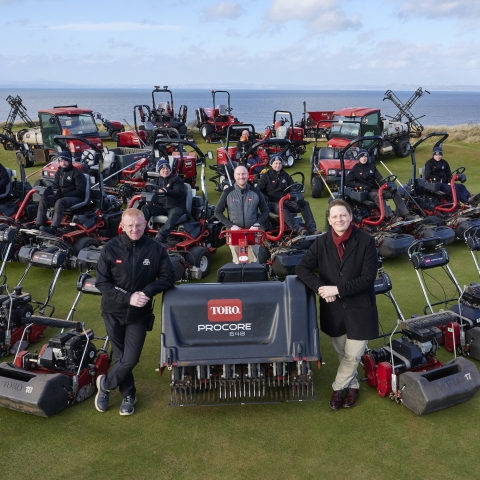 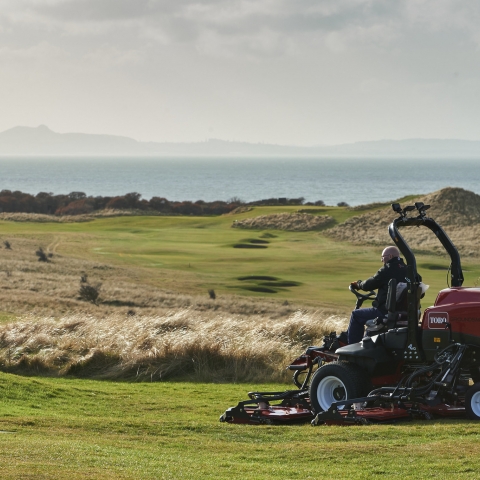 The Toro Groundsmaster 4700-D is one of a couple of machines used across all three of Gullane’s courses such is its productivity.
ShareThis
Facebook
Tweet
LinkedIn
Pinterest
Email
View all news View our products
Download Image 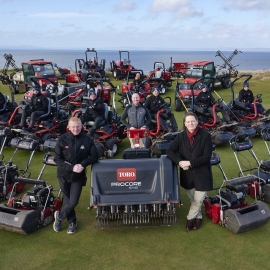 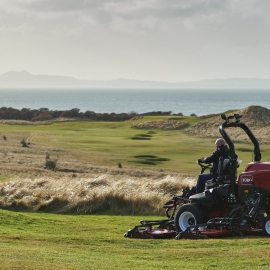 The Toro Groundsmaster 4700-D is one of a couple of machines used across all three of Gullane’s courses such is its productivity.
View all news View our products