The machine was selected to join the all-Toro fleet and continue its drive on economy, productivity and efficiency which has resulted in a course members are proud to be associated with.

Peter Bowden has been course manager at Dore and Totley for four years, during a time of rapid improvement. He says: “It was all about streamlining the processes. The course had huge potential which we’re delighted has now been realised, this resulted in the club being voted the best club in South Yorkshire by Your Golfer magazine. We achieved that by ensuring the course is presented in the best condition at all times. This is helped by the use of Toro equipment and getting the most out of the machines, keeping them in the best possible condition and when new technology arises, taking advantage of that.”

Peter is of course referring to the technological advances that have brought electric power to the game, without compromising on productivity, quality of cut or the bottom line: “As soon as one of the frontline greensmowers needed replacing it was a done deal that it would be the Toro eTriFlex 3370 we brought in. I have been focussed on bringing about the best possible return on investment for the club and we run a very efficient operation.

“One of the first things I did was invest in Toro’s fairway machines and Sidewinders so we can go right over the edges of the bunkers, reducing the time spent strimming. These machines are incredibly efficient and have saved so much time. We outsource our bunker brushing now too, that’s done by two students nine hours a week over three days. It makes economic sense for the three-man greens team to be working on things that utilise their skills in other areas.

“In addition, the board decided to use my sports maintenance company to supply the machines (Toro of course) and the staff to do all the rough cutting, which means the club doesn’t have to cover the outlay for the machines or the additional maintenance costs associated with them.

“All these changes have added up to an increase in income for the club and reduced costs, giving the best return on investment,” says Peter. “It made complete sense to choose Toro’s eTriFlex 3370. With the full support of the directors, who are determined to keep moving the club forward, the environmental benefits are important. However, this machine will save us money in the long run, on fuel, running and maintenance costs. There is a slight increase in the monthly outlay, but that is off-set by the increase in quality and service the eTriFlex brings.

“The quietness of the electric motor allows the greens team to start cutting earlier in the morning without affecting our neighbours, allowing more playing time due to extra tee times being available at the start of the day. The benefits we can bring to our members by getting them out on the course earlier is worth it and the quality of cut is outstanding.”

The machine was delivered by Yorkshire Turf Machinery, a sales division of Toro dealer Cheshire Turf Machinery, and managing director Steve Halley says: “This is the fourth electric greensmower we’ve sold. Despite economic uncertainty and tightening of budgets, people see the value this kind of technology can bring.”

Peter says of the relationship between dealer and club: “We do all the servicing and maintenance of the machines and a significant contributing factor as to why we continue to choose Toro is the availability of parts. I know that if we need help or advice it’s on the end of the phone with Steve and the team at Yorkshire Turf Machinery. If we’ve taken apart a machine and need a part, we’ll have it in under 72 hours. It’s so convenient. Ordering is direct with Toro distributor Reesink online via a mobile phone.”

It really has been a mutual effort at Dore and Totley as Peter finishes by saying: “The whole greens team, all the club’s committees and Steve Roberts, the professional and his team, have been working hard to take the club forward both on and off the course. The improvements have brought in new members as well as increased numbers of visitors and societies.”

For a team of three plus Peter and a 22-hole course that never closes, it’s imperative Peter has a machinery brand and partners he can rely on to get the job done and the numbers prove that Peter has the dream team at Dore and Totley. Something he’s very proud to have achieved for his home club he’s been playing at since the age of 12! 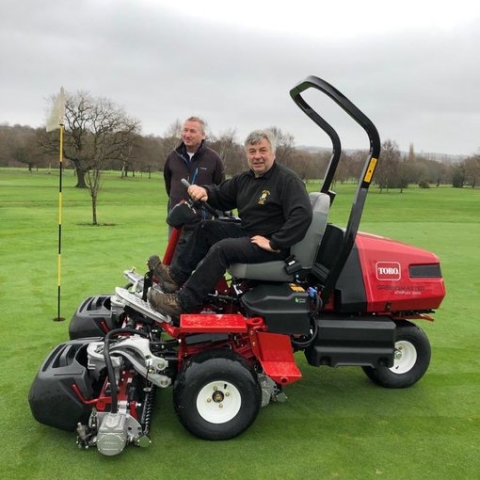 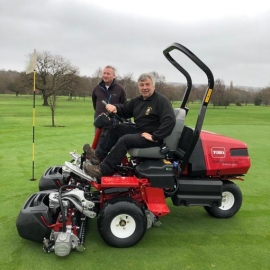