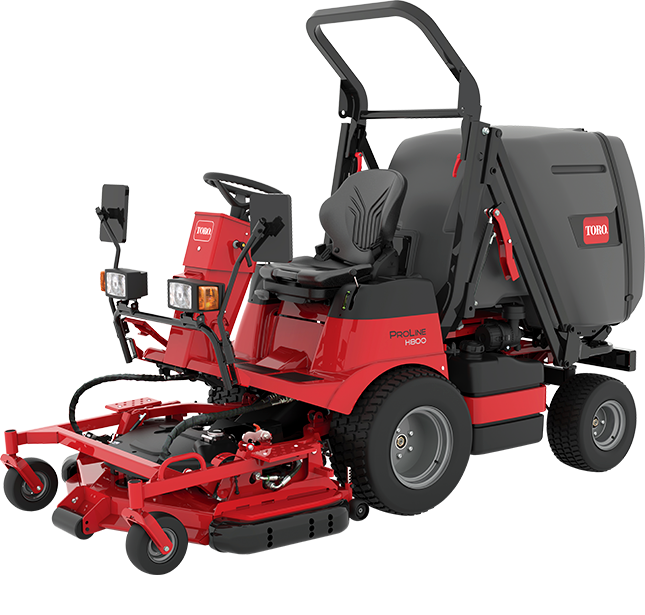 Just another rotary mower with a bulk collector?

A casual look at the Toro ProLine H800 with a 1.26cm working width and an 810 litre capacity collector which can discharge at a height of nearly 2m. The out-front rotary ProLine ticks key specification must-haves for this type of machine, but does it have what it takes to deliver in demanding damp conditions?

A collector mower is only as good as its abilities to deliver in varied conditions. A machine that has stellar performance in typical summer mowing can often prove somewhat finickity when tasked with mowing ground littered with wet leaves. Other mowers work well in difficult conditions but prove a little on the slow side in fairer conditions. The trick is to find a machine that can cope in all conditions and a deliver high-speed quality of cut to keep on top of what can be fast growing grass. Add the demands of a top-notch finish and your mower choices can look rather slim. Is the out-front rotary Toro ProLine H800 collector mower the answer? Chances are, yes it is.

Long wet grass and deep autumn leaves. Two things that will quickly show up any weaknesses in the design of a collect mower. Poor collection can lead to operator frustration with blockages and savaged operating schedules all too often becoming the order of the day.

Toro designers are obviously aware that clean collection can make or break a mower’s chances so the ProLine H800 comes with the benefit of tweaks that are claimed will help keep the machine working in what can be challenging seasonal conditions. As you would expect, these start with the 1.26m wide deck which follows the same basic structural design as existing Toro commercial rotary mowers; with a rigid ‘bull bar’ at the front and heavy gauge steel plate for the bed itself.

On the deck underside are a pair of contra-rotating blades. The paddle at the tips feature a noticeable upsweep to create the blast of air to blow clippings into the collector. So far pretty much as you would expect. This, however, is just the start. There’s a third central rotor mounted ahead of the main units to allow for a critical clearance between the two main rotors. When this spacing is combined with the deck’s overall depth, the net effect is to increase the mower’s capacity to cope with large volumes of bulky material.

Then there are the turbines incorporated into the base of the main rotors and the streamlined darts and vanes in the centre of the deck. The latter channel the air blast generated by the turbines and rotors, helping to ensure bulk material is forced into the collection hopper.

Although it is easy to overlook, a further small but important design tweak are the small cleaning paddles fitted adjacent to the deck outlet. These are activated each time the deck is raised, their action helping to ensure the outlet is not compromised by any build-up of material, particularly in damp conditions.

There will be occasions when the system gets clogged. The trunk linking the deck and collector hopper securing via a couple of clamps to facilitate its speedy removal should it become necessary. The dimensions of the trunk, incidentally, are related to the volume and pressure of air available to convey material to the hopper. The aim is to retain the air pressure required to force material in.

There has to be a compromise between the draft the deck produces, the noise this generates and the power the creation of an air blast consumes. Excess draft not only wastes power but generates excessive dust in dry conditions too; the trick is to arrive at the optimum collecting and hopper filling force.

Once material is discharged into the hopper, the next job is to prevent over-filling. This is solved by fitting a sensor linked to an automatic deck stop that is triggered when the hopper is full. There are three hopper sensor settings, the first for dry conditions, the second for long wet grass and the third for dealing with bulky material such as leaves.

A key design aim is to prevent the free flow of air flow from the becoming obstructed by over-filling the hopper. The hopper sensor triggers an automatic deck stop before the hopper is over-filled and help prevent the trunking from getting blocked.

Setting the height of cut is one of the first jobs. The ProLine coming as standard with electro-hydraulic adjustment to allow this to be varied between 20 to 110mm. A simple deck-mounted gauge shows the selected setting with adjustments being made via a rocker switch to the right of the operator and just behind the throttle. When mowing, the height of cut can be varied on the move, a real plus when working over areas with different grass heights or leaf depth.

It really is necessary to set the hopper full sensor according to conditions. Leaving the sensor in its dry grass position when clearing leaves will see the system block. It’s easy to set the sensor, just open the hopper and move it to the lowest of its three positions for leaves and grass.  On the flip side, if you subsequently cut just grass you will not have any problem leaving the sensor in this position. Actual collection is not affected, but you will not optimise hopper capacity.

As with all mowers, a few minutes getting used to how it operates in varied conditions is a key to getting the best finish. With the ProLine, slowing the pace and rising the deck to its near maximum position proved the best way to clear deep leaf litter, a second pass at the desired mowing height then allowing the deck to deliver a clean finish. The easy adjustment of the deck mowing height proved itself in these conditions.

Emptying the hopper is a two-lever job, the first lever raising the hopper to allow it to be tipped into a trailer, the second lever tips the hopper to dump its contents. The hopper door remains closed until it reaches a point where it can release and open fully. This means all the material is dumped in one go. For stability reasons, emptying a hopper at its full discharge height should be done on level ground.

A collector mower will only succeed if it can deliver good performance in more demanding conditions. There will be occasions when a mower clogs up, but this should be an exception rather than a common occurrence. The only stoppage encountered during my test was due to the hopper filling so quickly with leaves that we needed more room in the trailer sent out to cart them away.

Where the ProLine really scores is in its performance in more demanding conditions, it excelled with the collection of long wet grass as well as leaves.

A key feature of the collection system is that it hoovers up loose material without getting chopped up by the blades. The leaves in the dump pile are virtually untouched, reducing the power that would otherwise be wasted mulching them.

No tools are needed to raise the deck for service access. The deck underside has a number of design features to enhance the collecting power of the mower and the smaller central rotor provides generous clearance for bulky material between the blades of the two contra rotating rotors.

The blades create an updraft, the turbine at the base of the rotor generating extra draft to help force bulky material into the collection hopper. Note the small paddles. These are activated each time the deck is raised, clearing any material build up adjacent to the deck’s rear outlet.

Viewed with the trunking removed, the deck central guidance ‘dart’ can be clearly seen. This, and another on the opposite side, helps to channel airflow through the deck, boosting the mower’s ability to pick up and discharge material into the hopper.

When mowing, the height of cut can be varied on the move, a real plus when working over areas with different grass heights or leaf depth.

With a dump height of up to 2.0m, the ProLine is able to tip into both conventional and high sided trailers. A neat design is the way the rear door opens, the hopper tilting back fully before it releases. This helps ensure material is dumped quickly and cleanly.

Has the Toro ProLine H800 got what it takes to deliver when the grass grows quickly, and needs cutting wet or when it is called upon to deal with deep autumn leaves? With the usual caveat that a great deal will depend upon the operator, the best answer is to give the machine a try.