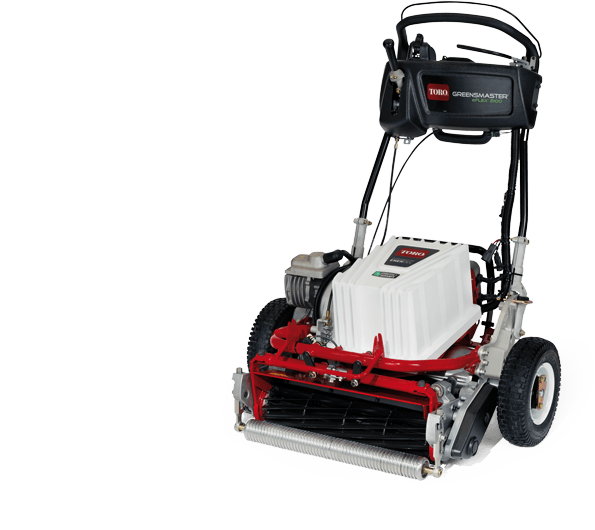 Although obviously keen to show off its latest products, Toro retains a six-season-old eFlex 2100 on its demo fleet. While this model has now been superseded by the eFlex 2120, Toro is keen to prove its faith in battery power. As the eFlex 2100 and current eFlex 2120 share the same driveline, why not prove this faith by continuing to run the previous model as a well-used demonstration model?

Toro eFlex 1820 and eFlex 2120 models have received the core development tweaks applied to the petrol-powered Flex 1820 and Flex 2120 for 2017. The handles now feature an improved range of adjustment and the DPA cutting units are fitted with the new EdgeSeries cylinders. The core of the original eFlex 2100 models, launched back in 2010, however, has not been changed. Why?

The Toro-developed lithium-ion battery system powering these eFlex walk-behind models is well-proven and consistently delivers upon its promise of giving nearly 4,500m2 of cutting power between charges in ‘real world’ operation. In simple terms, that is enough to mow nine greens or half a football pitch pretty much in silence and with negligible demands in terms of fuel use. The system works and, as there is no need to change it, it has been carried over to the current eFlex models.

It does take a little while to familiarise yourself to working a mower that is battery-powered. The gentle ‘putter’ of a petrol engine is replaced by a whirr, the ambient sounds you miss when using a ‘conventional’ mower all being restored when walking behind an eFlex. So why is Toro still employing a six-year old eFlex 2100 to show off these charms when this version has been superseded by the new eFlex 2120?

The downside, of course, is that a machine that is now in its sixth season will not benefit from the developments made to its newer siblings. But in terms of the actual ‘electric’ bit, an eFlex 2100 will give little away to its eFlex 2120 successor. That is not to say Toro has rested upon its laurels as developments in battery technology have been made but, rather than make new claims for the latest system, Toro simply sticks to what it promised at the outset. An eFlex 2120 should deliver enough charge to mow up to nine greens, just as it promised for the original eFlex 2100.

Operation between the original eFlex 2100 and the latest eFlex 2120 has not changed. Insert the key and turn the mower “on”. After a brief delay, the InfoCenter display comes alive, showing the state of the battery’s charge and speed setting in the default start up menu. Unlike a petrol Flex walk-behind mower, the InfoCenter bar chart showing the ‘throttle setting’ is repeatedly accurate in that the bar chart level of power selected by the operator will be the same each time it is set.

Next up, you engage drive the DPA cutting units, select drive and off you go. Take up is best described as manageably instant. With no mechanical clutch to divert power to the drive roller, the eFlex just seamlessly surges ahead, a whirr from the cutting unit and a flurry of clippings appearing in the collector reinforcing the message that it is all systems go.

When it comes to the turn, the accepted practice of raising the unit on its roller and swinging the mower around operates just as it does with a petrol Flex model. The difference here is that Toro fit the eFlex with an EZ-Turn feature. In flat conditions, many may not really see a need for this feature but, when you are mowing a green with an awkward approach or slope, EZ-Turn is really handy as it enables the speed of the mower to be adjusted the instant weight is taken off the cutting unit for a turn.

By simply adjusting the turn-speed down (it will also go the other way to speed the turn if wanted) it is possible to bring the speed down to what you want. During the demo, this was handy as the putting green we were cutting had a pronounced down slope on its extreme eastern flank. Getting the turn speed right for this element of the mow was made simpler with EZ-Turn, with no need to throttle the revs and rebuild them as you want to do with a petrol Flex model. Slowing the turn speed by around 10 percent made flipping between bouts easier and, more importantly, helped ensure the return pass was exactly in line with where you left off, with no speed induced in over- or under- compensation.

A mower with a few hundred hours under its cylinders is always going to show a few signs of wear and tear. But with the eFlex 2100, the lack of a petrol power unit really masked the unit’s age and hours. As you would expect with a demonstration machine, the mower was well-prepared, but few suppliers would have the confidence to offer up a machine now entering its sixth season as a frontline demo model.

The Toro eFlex walk-behind mower is pretty much the same as the company’s petrol powered Flex models. There are differences, of course: instant action from the electric power pack is one, little noise is the other. As for maintenance, the main one is to remember to charge the battery.

The chassis and DPA cutting unit is shared between eFlex and Flex models, electric and petrol models delivering the same high-quality finish. The pictured eFlex 2100 is in its sixth season and is run as a demonstrator to help reinforce the longevity of battery power.

Operating an eFlex calls for just the briefest of introductions, a slight delay between switching on to setting off allowing the electronic to fault test the system and ensure actual battery capacity is shown on the InfoCenter screen.

EZ-Turn allows the operator to slow the turn speed to match conditions, a useful feature on greens with a pronounced drop as pictured.

With no mechanical clutch to divert power to the drive roller, the eFlex just seamlessly surges ahead

IT'S THE SMALL THINGS

eFlex models use the same floating DPA units as their petrol siblings, but the new for 2017 eFlex 2120 boasts new EdgeSeries cylinders and a revised mount for the clippings box. The latter now rests on the DPA frame as opposed to the mower chassis to enhance collection over undulating greens.

That this eFlex felt pretty much ‘factory fresh’ is a sure indicator that battery power is not just a short-term fancy. It is a tech with staying power.