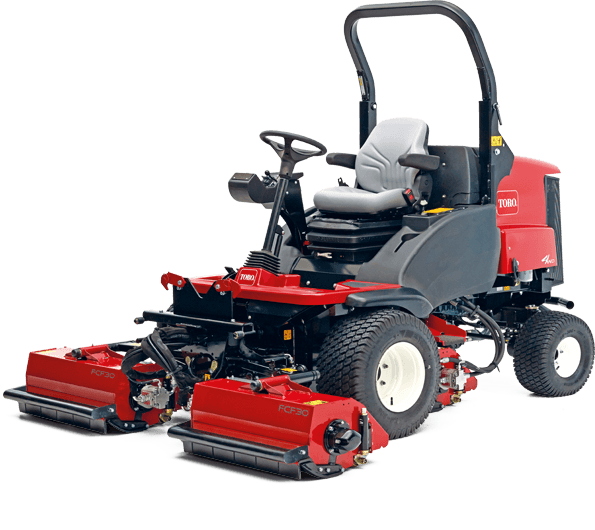 So how about giving a flail mower a spin?

You want the finish of a cylinder mower, the rugged durability of a rotary and the productivity of a triple. Now add the ability to cope with long, wet grass, and not leave clumps on finer turf. Sometimes ‘meeting the brief’ gets a bit tricky.

No point banging on about the cylinder versus rotary mower argument. If a contract calls for a ‘cylinder mown’ finish the discussion is not worth having anyway. There has been, however, a third way for many years now – and that is the flail mower.

Flail attachments for out front-rotary and triple mowers have been around for a while now and there are of course dedicated self-propelled flail mowers to consider, too.

And now there is another one, the Toro LT-F3000 triple.

New? At first glance you would be forgiven for thinking this new model is just derived from the existing LT3340 triplex cylinder mower but with flail heads in place of cylinders. Then you spot those tell-tale signs that the newcomer has a more powerful engine, a larger rear grill being your first clue. The cooling pack for the hydraulics is considerably bigger, too.

The more you look, you can see Toro has adopted a very different drive package between these two mowers. So despite the cylinder LT3340 offering the same nominal maximum cutting width of 2160mm, the flail LT-F3000 is powered by a 44.2hp Kubota four-cylinder diesel against the 35hp used to power the cylinder LT3400. The hydraulics have been beefed up on the newcomer, too, allowing the three flail cutting heads to spin faster than the cylinders of the LT3340 and to also cope with higher loads.

It is these two latter points that are important. To work efficiently, a flail head needs to spin fast enough to create an updraft to lift material to be mown so it can be cut effectively by the leading edge of the flail. It sounds pretty simple but, in practice, designing a flail head is nowhere near as easy as it may appear: the cutting units on the LT-F3000 have been in development for over four years.

The next trick is to build a flail head that has the volume to be able to contain large amounts of trimmed material and for this to be also ‘processed’ by the flails to help chop and mulch it and further ensure it is evenly distributed behind the mower. Getting the quality of cut to performance ratio right is a tricky balance and one Toro has worked hard to achieve.

So, how does the LT-F3000 do? Of course you have to have a bit of perspective. How long is the grass you are mowing, how much are you removing per pass and exactly what level of output do you want from the machine. Add the normal commercial mowing variables of uneven terrain, potential hidden debris and the very key differences between sports, regularly mown and rougher amenity grass and you realise this mower has versatility built into its design brief.

For our test drive we selected a mixed public space, the turf receiving routine mowing in summer with a maintained height of no more than five inches and a cut height of around three.

To add interest, we decided to tackle the grass in early March, the ground presenting the typical late winter mat of varying grass lengths strewn with the wind blown detritus expected of municipal turf. A real mix in other words. Set to its maximum cut height of three inches – or around 75mm if you prefer – the mower set off in the teeth of a freezing gale to cut the wet, matted grass.

And the results? A decent ‘commercial’ finish.

Would the cut have been better from a cylinder mower in the same conditions? Frankly this was not really the sort of ground that you would cut with a cylinder machine. It was too uneven. On those stretches where the ground could potentially have been mown with cylinders then perhaps the results would have been a draw. What about a rotary deck? A good rotary would have cut pretty much as well but possibly would have struggled to deliver such an even distribution of cut material.

Is this to suggest the LT-F3000 would do a ‘better’ job than a rotary or cylinder in the same conditions, then? The answer has to be, in these conditions, probably yes. Will the LT-F3000 beat these machines in all conditions? Can’t answer that one. But you can. Why not give this new flail-head triple a try.

With a nominal 2m width of cut, the Toro LT-F3000 flail mower is designed to offer the fine cut of a ride-on cylinder mower with the added versatility of a rotary. The units can be raised individually, allowing the width of cut to be reduced to the 0.76m width of a single unit

When the mower is reversed, the cutting units lift automatically. Although this will see material within the heads drop out, a clean-up pass will distribute them evenly for a good finish around obstacles

The main controls are all grouped for easy access, the LT-F3000 sharing its core design with existing cylinder models

Cooling for the high output hydraulics is via an easily-accessed radiator. The hose layout as pictured will be revised on production models. Note large cooling area, a critical feature on a commercial mower

Developing 44.2hp/33kW, the four cylinder Kubota engine is more powerful than the 32hp power unit used in the Toro LT3340 cylinder model. A flail will need access to more power to cope with more difficult mowing than would be expected of a cylinder machine

Toro claims to have spent four years perfecting the design of its flail head. Fitted with 16 Tempest flails, the 275mm-diameter flail should be able to cope with more challenging mowing conditions yet still deliver a good finish

Height of cut is set by adjusting the plain rear roll and can be adjusted from 20 to 75mm (3/4 to 3 inches). Note grease points on end of roll and on adjuster

Direction of travel is via separate pedals. The hydrostatic transmission offers forward speeds of 0 to 15.5mph, reverse restricting speed to 7mph

Getting the quality of cut to performance ratio right is a tricky balance and one Toro has worked hard to achieve.

Direction of travel is via separate pedals. The hydrostatic transmission offers forward speeds of 0 to 15.5mph, reverse restricting speed to 7mph

It looks as if it has the potential to deliver rotary-matching versatility with the output and finish of a commercial cylinder mower.

Height of Cut: Infinitely variable between 20 to 75 mm