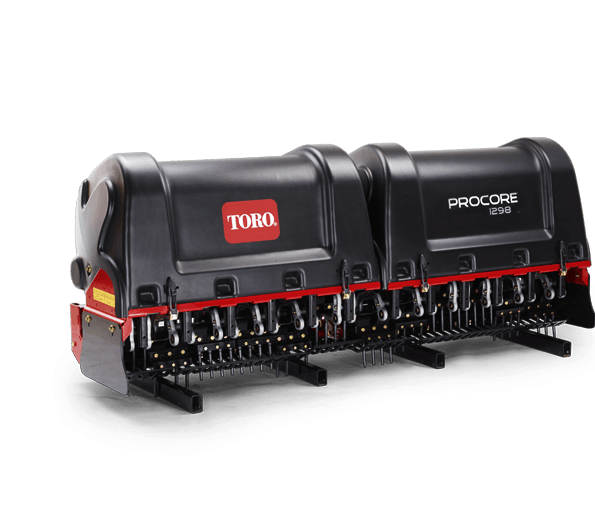 Shallow aeration and hollow coring to depths of between 50mm to 100mm is a long established management tool in modern sports turf management. If you opt for a wide area, there is no reason why, in addition to golf, those tasked with sports, formal and indeed amenity turf management cannot use one tool for all applications.

Sports turf aeration has evolved to the point where most now appreciate the different roles played by ‘deep’ aeration tools such as the Toro ProCore SR series and the shallower working ProCore 1298 we look at here. Designed to work at depths up to around 100mm, but more typically in the 25mm to 75mm range, the ProCore 1298 can be fitted with a broad choice of Toro solid and hollow Titan tines, making it suitable for use pretty much from spring to late autumn.

Introduced by Toro in 2012, the ProCore family of aerators, to include the self-propelled pedestrian ProCore 648 and tractor-mounted ProCore 864, all work in the same way and essentially share the same ‘modular’ build. A key feature of all models is they will leave a clean, even finish that allows them to operate on fine turf with the absolute minimum of surface disturbance.

It is this that has enabled the pedestrian ProCore 648 to win over so many greenkeepers. Golf greens can be hollow tined by this highly manoeuvrable machine in the autumn or early spring and then used with solid tines to routinely aerate the greens for the rest of the year. Being able to aerate greens without causing surface disruption makes the ProCore popular with golfers too.

The tractor-mounted variants of the ProCore work in the same way as the pedestrian model but with the potential to cover larger areas. Toro use the model number to outline its size, the ProCore 1298 having 12 tine banks and a 98-inch working width or just under 2.50m. This width is key in enabling the machine to cover a lot of ground. As a very rough guide, holes spaced at a tight 25mm can be delivered at a rate in excess of 2,000m2 an hour, upping the hole spacing and tractor speed allowing this machine to cover perhaps 9,000m2 or more an hour.

This impressive performance does not come at the expense of quality of work. Thanks to the design of the ProCore’s turf retainers and its ability to follow contours, the finish and work done by the wide 1298 behind a tractor will be of the same quality as the nominal 1.50m tractor-mounted ProCore 864 and 1.20m pedestrian ProCore 648. Going wider does not compromise the job done but it does significantly improve output.

So is the ProCore 1298 just a ‘wider’ version of the tractor mounted 864? Yes in as much that they share the same basic design but no in that the larger machine is in effect two 648 models mounted side by side. This is a key design feature, the 1298 working in much the same way as two machines running side by side. Although both ‘halves’ of the machine are driven by the same heavy-duty central gearbox, each section has a separate drive and crankshaft.

In terms of specification, the three models in the ProCore line-up all offer the same tine choices and working depths. Depth setting is the same, too, which makes it easier for operators to set up different models. Clearly you need to work a pedestrian model differently to a mounted machine but the aeration element is pretty much the same.

Weighing in at 1044kg, the ProCore is ideally matched to a tractor with a rear linkage lift capacity in excess of 1,100kg. With regard to power, Toro suggest a minimum pto power of 40hp, with 50hp recommended. As to the linkages, the machine can operate with a tractor fitted with either Cat I or Cat II. These are just the basics. To ensure the tractor can work with the machine it is important it can safely raise and lower the ProCore, most ‘compact’ tractors in the nominal 50hp category requiring the addition of front ballast. To ensure consistent hole spacing it follows that the tractor needs to be able to deliver a fixed forward speed at a given engine speed. The ProCore is designed to work with a 540rpm pto.

The unit operated for this demonstration was mounted on a TYM T503. This Perkins-powered tractor has a nominal 50hp rating with 40hp at the pto. So pretty much on the limit power wise. Lift capacity for this model is 1,300kg too, so not much in reserve here either. In practice, however, the combination worked absolutely fine. Fitted with a 16x16 synchromesh transmission, the TYM was operated in the lowest of its four ranges and swapped between speeds one and two to deliver a forward speed of around 1.0km/hr at a reduced engine speed of 1,900rpm. To ensure the tractor was stable when the ProCore was lifted, ten 250kg wafer weights were fitted up front. In work the combination was well balanced.

The ProCore was fitted with a four-tine head, Toro offering a three-tine alternative as an option. For those who need to swap tines regularly, Toro can fit a Titan QuickChange holder. Instead of using the three-bolt ‘clamp’ of the standard holder, the QuickChange system uses a simple socket system, a special tool supplied with the machine allowing fast tine fitting and removal.

Fitted with solid needle tines working to a depth of 50mm, the ProCore was set to work in three very different areas. First was a cricket outfield, including working the well-trodden path from the pavilion to the wicket. It was hard going, with a reduction in working depth to 25mm producing the desired light aeration. A key requirement was to just open up the turf to facilitate the uptake of any rain and promote the flow of air in the rootzone.

Next was a move to a formal lawn formally used as a tennis court but now reserved for various functions. It is an area that takes a lot of footfall and prone to going brown in hot dry weather. A few quick passes at around 30mm to evaluate the results proved all was as expected before moving onto a prime piece of hallowed turf. Located adjacent to a dining room and chapel entrance, this particular piece of lawn has no access, with ‘Keep off the grass’ signs. The tractor and aeration combo looked to be rather large in this setting but there were no fears putting the machine to work. In fact you would have been hard pressed to note the unit had done anything when we left. Impressive.

One of the keys to watching and working with the ProCore 1298 was noting how easy it was to adjust the working depth and swap the tines. The three-bolt clamp system may not allow as speedy a tine change as the QuickChange system but the job was hardly time consuming. A caveat is that the operator needs to ensure the faces between the clamps and tine collars are free of debris prior to nipping up the bolts. Even a small bit of grit could upset the even tightening of the clamps. Toro also recommends the bolts are nipped up to 30ft/lbs. This is to ensure each bolt is tightened the same amount. In practice most will get the ‘feel’ of securing the clamps without measuring, but those with access to a torque wrench will find the job even easier.

It is not just sports turf that can benefit from regular aeration. Fine turf can be protected by restricting pedestrian access but where this is not possible, aeration can reduce damage caused by trafficking and also encourage a healthy root zone.

The cast aluminium RotaLink Tine Guides ensure the tines enter and leave the sward in a clean, vertical action. The pivot points are sealed for life, the ProCore having grease points only on the gearbox driveshafts and PTO.

It is difficult to pick up the hole pattern in a photograph, but in this case it is possible to make out the clean finish left, in this case, on a cricket outfield.

Smooth running of aeration kit may not seem that critical until you are the one tasked with operating the machine. In work, the ProCore 1298 ran with an almost uncanny smoothness.

With its covers removed, the workings of the ProCore can be seen and easily worked upon should it ever be necessary. Note the broad toothed belt drives on each end of the unit. In effect, the 1298 is much like two 648s linked together.

Setting the tine depth is simple, a socket on the adjuster nut also moving an indicator that gives a simple guide to the selected depth. As an outline, a tine can be placed on a setting decal on the machines cover to indicate the working depth.

Toro offers a choice between three- and four-tine carriers, most selecting the three-bolt clamp system. Ideally the bolts should be nipped up to 30ft/lbs but in practice most operators soon get a ‘feel’ for how tight to tighten the bolts.

In fact you would have been hard pressed to note the unit had done anything when we left. Impressive.

Toro offers a choice between three- and four-tine carriers, most selecting the three-bolt clamp system. Ideally the bolts should be nipped up to 30ft/lbs but in practice most operators soon get a ‘feel’ for how tight to tighten the bolts.

Aeration depth: 5ins maximum (Hole depths greater than 4 inches can only be achieved with 6.5 inch length tines and with turf holders removed. Some degradation in hole quality may be observed in this configuration.)