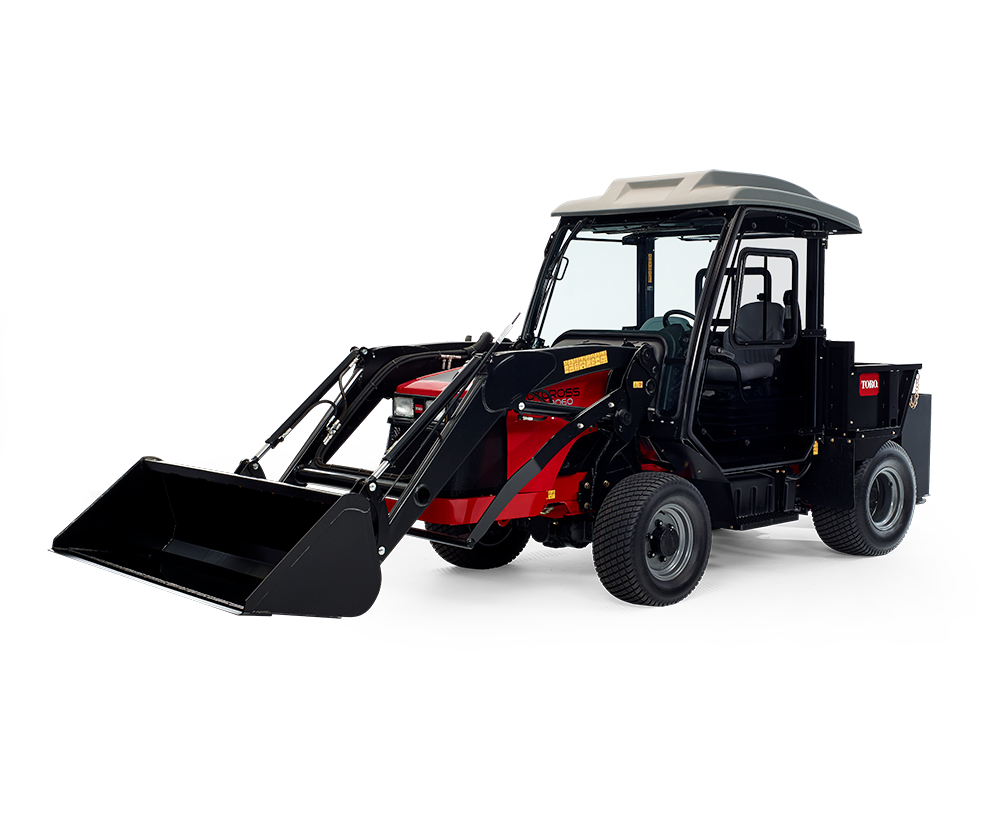 The question is what exactly is the Outcross and to whom will it appeal?

Take a quick look at the Toro Outcross and the chances are you will be struck by its unconventional appearance. The bonnet extends well forward of the front axle, with a cargo bed ahead of a rear three-point linkage. Add a front loader and a hefty ballast weight on the rear and you end up with a long, somewhat ungainly looking machine that looks like a cross between a tractor and utility vehicle.

The test machine kitted out with a cab, rear load bay and a frontend loader, may not grab any headlines for its looks but once you are settled inside and start to work through what this machine has to offer it all starts to make sense.

To explain why, consider the Outcross in its tested form where the initial task was to use it as a ‘tractor’ loader, the latter offering a capacity of 998kg to a maximum lift height of 2.7m. This near ‘one tonne to over two metres’ is pretty much on the money for most grounds, amenity and sports turf user needs, matching the typical demand for general handling and loading duties.

Hang on a minute, though. This loader is fitted to a vehicle that is definitely more utility vehicle than tractor to ‘drive’, with a relatively low seating position that has the added ‘quirk’ of sitting the operator to the left. Working a front loader should be less easy than it would be from the central seat and raised height of tractor, right? Well yes. It does take time to adjust to using a loader from the lowered seating position. Further, the loader has simple crowd and dump, with no self-levelling. Filling a bucket or handling pallets is bound to be trickier than with the same set up on a tractor.

Except it did not quite turn out to be the case. The loader is controlled via a central joystick that delivered well-weighted, proportional control. After initially being thrown using a loader from an unfamiliar seating position it only took a couple of loads to establish actually using it posed few problems in practice. Much of this is due to being able to see more of the front bucket and load than you would expect.

Operating the Outcross as time progressed proved how quickly its initially unfamiliar set up becomes quite normal, making this an easy machine to just jump in and use. Part of this is down to the simplicity of the hydrostatic transmission and how Toro has designed the complete Outcross package to be operator focused. When using the loader, for example, the operator selects a dedicated mode for loader operation on the five-position selector that sets the working mode.

No need to choose between high or low speeds, the ‘automatic’ loader position delivers enough torque to the wheels to power the bucket into a heap of material but remain smart witted enough to also then allow the machine to be swiftly backed out and shuttled forward at a decent lick.

This ability to match the transmission to the job also shines through when you switch to the automatic High and Low ‘ratio’ positions on the controller. Hydrostatic transmissions can deliver a noticeable mis-match between engine revs and travel speed. With the Outcross, the four-cylinder 59hp turbo diesel upfront was not expected to run at full engine speed when running at the all-out 20mph transport speed. Nor did it become bogged down when scaling a slope.

This is further reflected in Toro offering two extra transmission settings, the first a creep speed / inching position and the second a ‘fixed’ gear setting that delivers a constant forward speed for duties such as coring.

Set up and save

Now matters get really interesting. The Outcross is designed to operate a broad range of attachments, as you would expect from a unit that has a 1,134kg capacity rear linkage that easily handles a ProCore 1298 with 2.5m working width, more of which to come. Where it differs from the set-up you would expect on a ‘standard’ utility vehicle or tractor is that with the Outcross once you have set up how you want to use an attachment, you record your favoured set up and quickly restore them when you come to use the same attachment several months in the future. What is recorded goes beyond details such as fixing the forward speed, other settings such as linkage lift height can be recalled too.

So can the Outcross offer tractor rivalling performance, and really be able to operate relatively heavy rear-mounted equipment? We picked up a ProCore 1298 which weighs in at 1,043kg which is not just within the lift capacity of the Outcross, but it could also be easily handled without the need for ballast to be added up front. This is where the cleverly thought out ‘nose heavy’ design of the vehicle shows its worth, the engine weight ahead of the front axle acting as a counterweight.

The flip side to this weight up front does mean the ‘rear’ of the vehicle will go light when using a front loader, hence the need for the 800kg counterweight that comes as part of a front loader package. It follows you will not want to lug that big lump around when not needed but weights like this can be a bit of a pain to couple up to and remove. Which is why Toro has designed in another feature: remote hitch up.

The rear linkage is raised and lowered from the cab via a crescent shaped bar under the steering wheel. It takes a while to get used to operating a rear linkage this way but it soon fits in well with how the Outcross operates. When hitching up an attachment, visibility over the linkage can be hidden by the standard rear 454kg capacity rear cargo bed. To get around this, a flap in the bed floor lifts out of the way so you can see what you are doing, but good visibility will not get around the typical need to shuttle back and forth to get the linkage lined up.

So, Toro has fitted a cable operated remote control to allow the operator to back up and steer the Outcross from outside the cab. Hitching up an attachment this way is something will perhaps need time getting used to, but it is a useful feature that will appeal to those fitting and removing heavy mounted kit. As you would expect, the system has in-built safety systems to prevent the Outcross speeding back and forth without an operator in the seat and steering the machine in this way initially feels rather strange too. But most will find the remote-control system a real plus at times.

With the Outcross, Toro has come up with a tractor-utility vehicle that really is something new. All-wheel steering appears to deliver tight, turf friendly manoeuvrability. There is a choice of tyre types to include both turf and more aggressive tread patterns, permanent four-wheel drive coming as standard. We did not put traction to the test but did try a few fast turf scuffing turns only to find the scuff was less than expected.

Test conducted at The Oxfordshire Golf Club with greatest thanks.

Loader fitting and removal is easy and should take well under five minutes. The hydraulic connectors will be labelled for customers’ machines, this section of the coupling proving the only problem encountered when hitching the loader back up.

Offset seating initially feels a bit strange when using a loader, but it is something that soon ceases to be noticed. The Outcross proved easy to operate.

The hefty rear-loader counterweight proved its worth when pushing into a load and was extremely stable with a fully raised load in the bucket.

The fixed rear load box does not tip, but it does have a tailgate that can be either latched forward to ease access to the rear linkage or folded in and completely out of the way.

Hitching up some items of kit is easier with two people. With the Outcross, the cable attached remote-control enables the operator to steer and back-up the machine and then lower the linkages into position. With practice, hitching up on your own could be both safer and faster.

Engine access, even with the loader in place, is good, making daily checks a doddle.

Operating the Outcross as time progressed proved how quickly its initially unfamiliar set up becomes quite normal, making this an easy machine to just jump in and use.

No need to get lonely when you are loading up, the two seat Outcross looks after a third party as well as it does the driver.

As you would expect, the Outcross can come with a variety of options, to include a fully fitted cab with heating and air conditioning and potentially a choice of rear load bay systems too. What comes as standard, however, is for more usability and versatility than you may think. This tractor-utility hybrid has real vigour!

Boringdon Park Golf Club Rises from The Ashes With...