Implementing moisture level monitoring, updating controllers with the latest software and frequently applying evolving course setup conditions to your irrigation programmes, all contribute to responsible and sustainable management of your golf course. Here we talk to Ed Stant, course manager at Trentham Golf Club near Stoke-on-Trent, about how recent changes to his irrigation management are paying dividends.

“Two years ago we had a completely new irrigation system installed,” Ed says. “We opted for the intuitive Toro Lynx control system with 170 Infinity series greens, approaches and surrounds sprinklers. Having the right technology greatly aids professional irrigation management, but getting the most out of it is a skill in itself, and for me it all starts with monitoring soil moisture levels. I use a HH2 Moisture Meter probe and its readings depends on what irrigation I apply.”

Knowing the exact conditions your turf’s health faces will lead to more informed and ecological decisions, as you will only use the water needed to sustain it. Couple this with an intuitive control system which can be accurately tailored to precise conditions and requirements, means you have even more control over water consumption and sward health. This is integral to good irrigation practice as every area of turf can be different.

“Having an intuitive control system is fantastic for precise irrigation and, of course, specific requirements around the course. We had a reasonably wet summer in 2017 but as we all know no course is uniform and for whatever reasons certain areas will need more moisture than others. Being able to apply additional water where it is needed over the last couple of years since we got the new system has resulted in us having great grass coverage across the entire course, even in the walked areas.

“Since we last spoke, we’ve also put a lot of time and effort into killing the coarse rye grass around the greens surrounds and that meant a lot of specific watering of the affected areas. Being able to water-in just the top-dressing or apply water where overseeding and spreading herbicide, has greatly aided the process, allowing us to also be far more water efficient than we could have previously been.”

Another factor contributing to improved efficiency and one of Ed’s highlights with the new system and sprinkler set-up are separate surrounds sprinklers: “Having separate surrounds sprinklers means we can irrigate in opposite directions and, therefore, avoid overwatering the greens when irrigating the surrounds. We couldn’t achieve this level of precision with our last system and I have to say it is one of the best things the new system and sprinkler set-up we opted for offers. It also allows us to dampen down the bunkers when they get dry, which is another big advantage.”

Adding to this efficient irrigation at Trentham Golf Club is the fact that the club is also sustainable. At the same time as the irrigation system installation a 42m borehole was put in and seeing as the club does not exceed its limit, it means free water for irrigation purposes.

This carefully managed control over water usage is great; it is more environmentally friendly, plants are healthier, surfaces are more aesthetically pleasing, playability is improved, and it’s saving money too. Applying just the right amount of water is a no-brainer. Every drop counts, and every drop saved benefits the club, the players, visitors and the environment, as confirmed by Trentham Golf Club! 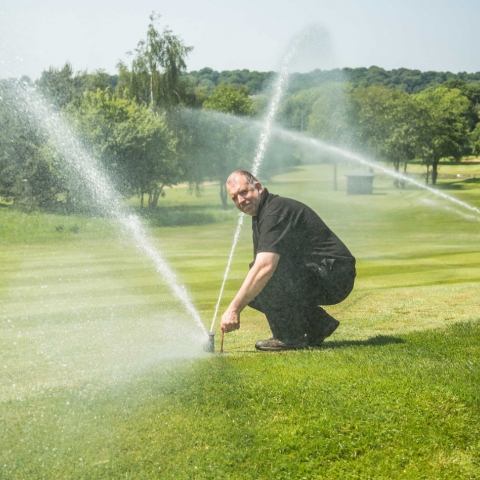 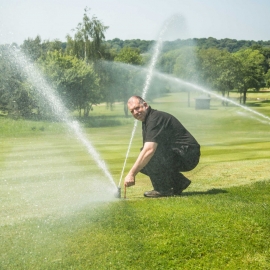