As anyone who has gone through the process will know from start to finish choosing and installing an irrigation system can be a lengthy one. It can be complicated, fraught with issues and disruptive to the course and its members, but it doesn’t have to be.

For Ramsdale Park, which has recently invested in a Toro Lynx control system with Flex 35 series sprinklers, it was a job made easy thanks to Toro UK distributor Reesink Turfcare and installer North Staffs Irrigation.

John Evans, course manager at Ramsdale Park in Calverton on the outskirts of Nottingham, tells us about his experience. “We have two 18-hole courses here and needed a new irrigation system across both. The old one had PVC pipework, poor pressure, was prone to leaking and was generally taking us a lot of time to maintain and keep in reasonable condition to irrigate the courses correctly.”

The process, which comprised of two phases, 130 new sprinklers, a new pump and all new pipework began in 2013 with the decision to use Toro, as John says: “Toro is one of the preferred suppliers for the Burhill Group, which Ramsdale Park is part of; we use Toro machinery and other clubs in the group also have Toro irrigation systems.” But despite the size and scale of the project and while it obviously couldn’t fail to impact on life at the course, peace of mind came from Reesink Turfcare and North Staffs Irrigation.

“You can never completely remove the stress that installing a new irrigation system brings to your course,” says John, “but working with the guys at Reesink and North Staffs Irrigation certainly made my job easier. They were very helpful and always on the end of the phone for advice. Choosing a system, installer and distributor are big decisions and I feel confident we made all the right ones. The system is reliable, efficient and easy to use and the process, which took two years, was as smooth as it could have been.”

Plus, it’s making the club big savings. “It is 72 metres from the pumps to the highest point on the course and 27 of the 36 holes are at roughly the same height as the pumps so we have pressure regulators in key areas to ensure we have an even amount of pressure throughout the system, this means it’s a far more efficient way of watering than before. Proof of that comes from its first full season in 2015 when we achieved a 40 percent reduction in water usage.”

John concludes by telling us about how much easier his job now is. “The operation of the system whether from an app on my phone or the computer saves so much time; I can turn the system on or off from home should I need to, in seconds. Previously I would’ve made a trip into work in the evening or at weekends, I can now control water application wherever I am. One Friday I set the irrigation to apply 1.5mm for the weekend, based on the weather forecast, unfortunately it was wrong! We had a scorching weekend so literally at the press of a few buttons I doubled the percentage of water put down. It is so convenient.” 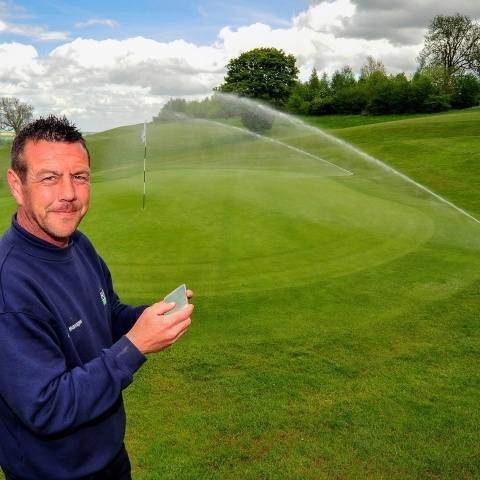 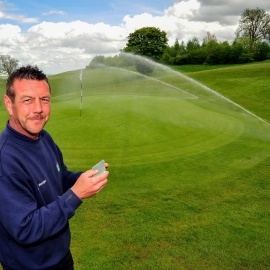