Over the last 18 months the 115 year-old Pwllheli Golf Club on the northern edge of Cardigan Bay in North Wales has been investing in its future by bringing in a range of new Toro greens, tees and fairway mowers. It all started in 2013 with the delivery of a Groundsmaster 4300-D with four wheel drive system and five Contour Plus™ 22” individual decks chosen for its ability to follow ground contours exceptionally well and most recently sees the arrival of a Reelmaster 5510-D fairway mower and Greensmaster TriFlex 3420-D, together worth £80,000. The new equipment replaces three older competitor machines and complements an existing Toro Reelmaster 3100-D Sidewinder and Greensmaster 3250-D.

Pwllheli course manager and club professional Stuart Pilkington explains what he and his team find so appealing about Toro: “We tried a number of manufacturers’ machines before we settled on Toro. During the onsite demos it was amusing to watch the team’s reactions; with the Toro equipment they were grinning from ear to ear.

“Apart from operator satisfaction we’ve found the machines robust and reliable,” continues Stuart. “We have three ground staff and we rotate the machines between them on a three weekly basis. The parkland part of the course grows grass like nobody’s business and we’ve found the GM4300-D with its CrossTrax four-wheel drive system, in particular, to be brilliant for tackling this.”

A true links course, claimed to be the closest course in Europe to the sea and flanked by the majestic mountains of Snowdonia, this 6,100-yard 18-hole par 69 course is a toughie to play and maintain. The dunes between the 8th and 11thfairways are so close a hooked ball can land on the beach and half the course is on fast draining sand, while the inland section is on heavy clay on a reclaimed flood plain, boarded by a river.

Stuart explains more: “The sand area burns off quickly and has in the past suffered from salt damage, so we have to adjust our management techniques accordingly. On the parkland area in particular we have to be on top of drainage maintenance otherwise we’d be getting complaints that players were getting muddy shoes! Some years ago the club invested in a major drainage scheme, which sadly became somewhat neglected which affected membership, but more recently we’ve seen membership starting to rise as the course improves, which is in part thanks to using Toro.”

The Toro machines come as part of a five-year package arranged through local service dealer Major Owen. Stuart says of this: “It may be a five-year package, but with proper use and regular maintenance, I don’t see why we won’t be using the machines in 10 years time!”

“We’ve built up a close working relationship with Major Owen. This has proved invaluable to running the equipment, we do all our own maintenance and repairs, but local representative Glyn Hughes is always there to advise and help; indeed he’ll even tell us off if we’re not using a machine correctly! He’s also willing to help ensure the lads keep the machines set correctly, he’s very much part of our groundscare team.

“Another factor that influenced our decision was the ready and speedy supply of any spare parts. It’s reassuring to know that a machine would never be out of operation for long.”

Picture: Stuart Pilkington, Pwllheli course manager, in the middle with Glyn Hughes from dealer Major Owen on the left and Lely’s Nigel Lovatt, with the club’s Toro fleet 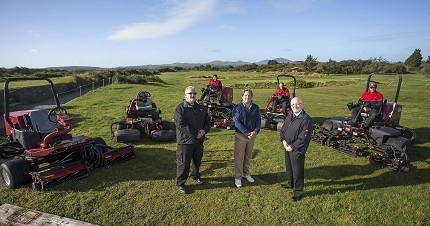 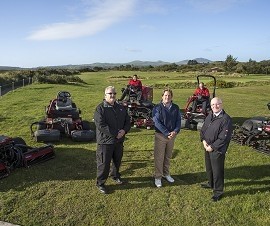