Two golf courses, Hallmark Cambridge just off the M11 and Hallmark Welcombe in Stratford Upon Avon, are seeing a vast improvement on all their playing surfaces thanks to Toro. The delivery of two fleets of Toro greens, grounds and fairways mowers, utility vehicles, aeration machinery, plus top dressers and sprayers for both clubs has taken place following the Hallmark Hotels rebrand earlier this year, since their acquisition by the Topland Group from the Menzies Hotel chain at the end of 2013.

Shaun Van Looy, General Manager at Hallmark Welcombe, says: “This is a significant investment by the company. Both courses had the potential to be the best in the local area but were suffering from under investment. This enables them to reposition and redefine themselves using modern machinery.”

And the machines are making a big impact already says Matthew Davis, course manager for both clubs. “Toro has without question helped us achieve what we all strive for and that is good, consistent playing surfaces. We have struggled with poor machinery in the past making this job harder than it ought to be. Now four of us can get the whole course cut, with the exception of the rough areas, in four hours, which I think is a great achievement.”

But don’t think the rough mowers are letting the side down. On the contrary; now, with the speed and maneuverability of the Groundsmaster 4000-D a day per week is shaved off cutting the roughs. And with these time-savings, come additional benefits such as a reduction in fuel costs.

In the extensive deal which includes the Reelmaster 3100-D with Sidewinder, SandPro 2040, Reelmaster 5610-D and both electric and diesel Workmans, two machines stand-out for both Matthew and head greenkeeper at Hallmark Welcombe, Adrian Henshaw and they are the TriFlex 3420 hybrid and the MultiPro 5800-D. Says Matthew: “The use of the TriFlex on our tees has made them much more consistent. We have mostly long thin tees and the old mower used to scuff the ends, but with the TriFlex this is no longer a problem.”

The other, the ProCore 648, is, says Adrian, doing “a fantastic job keeping the sand and clay soil open all the time, which has made the greens so much healthier and 100 percent easier to work on. The MultiPro has also helped with this. In fact, I’d go as far as saying the MultiPro is the best there is out there.”

So with the kit they need to work quicker and more efficiently, what’s next for the two clubs? “With the combination of Toro and our teams we’ve got the potential to achieve a five-star rating,” says Adrian. And to that Matthew agrees: “The introduction of the fleet has breathed positivity into everyone and we know it will help us achieve our aim to bring the overall standard of presentation of both courses to a level that is talked about positively in the industry.” 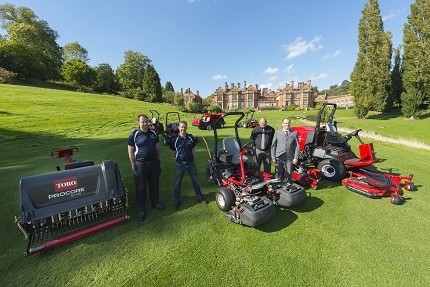 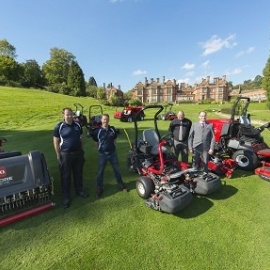