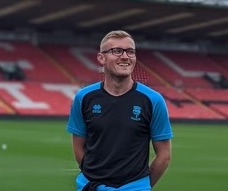 There’s a huge amount of job satisfaction in groundscare. For Brad, knowing that the games and activities that go on at the site would not be possible without the grounds team’s hard work is his reward. That seems like a fantastic one to us too!

What I enjoy most about being on the board is promoting the industry to young people and hopefully inspiring them to join the industry. As I'm sure most will agree, once you get a taste and experience working within the industry, at whatever level, you are hooked.

"I fell into the industry through purely being in the right place at the right time and putting myself out there, going out of my way to gain experience and contacts," says Brad. "I studied for a degree in Sports Coaching and PE and worked as a groundsman full time throughout the summer and part time in the winter to help support me through university. I really enjoyed the work and decided that when the right opportunity came along that I would pursue a career in the industry."

"Aged 14, I initially did odd jobs at a local semi-professional football club, where I also assisted the club groundsman. When I was 16, I attended a county cricket game at Worcestershire County Cricket Club and was intrigued by the work of the groundsman. So I met the head groundsman (Tim Packwood) after the game and asked if there was any possibility of helping the grounds team. He then let me work a week with the team during an Ashes warm up game in 2013.

"When I went to university, I worked with Gary Barwell and his team at Warwickshire County Cricket Club for two seasons and learnt so much from the experience. I decided to use my experience to take on responsibility of my own ground in the Birmingham cricket league, where I looked after the main ground and managed a team of volunteers on the outground. From there I moved to Whitgift School in Croydon, on the second site which is about a mile down the road from the main school campus. While at Whitgift School, I also had the amazing opportunity of becoming part of the matchday staff at Wembley Stadium. I have been very lucky with my career so far and as a lover of sport I thoroughly enjoy the environment."

So what does your current job involve? "I have recently moved into a new role as Head Groundsman at Barnt Green Cricket Club. This role involves overseeing two grounds, with the main ground hosting Birmingham Premier League cricket, as well as County 2nd team and Academy matches. It is a great opportunity to really make my mark on a ground and have total ownership of all preparation of the wickets, outfields and nets. I feel this is the perfect challenge at a great club with excellent first class cricket connections to really show what I can do. This is also going to be a fantastic learning opportunity not just in what I will learn about the ground and wicket prep but also what it takes and what is involved with being a head groundsman."

"I am very proud to say that I made a major contribution to the preparation of an England Test Match pitch. I will never forget that after my first Test Match had finished when we were sweeping up the wicket after the game, Gary Barwell said: “Brad you’re now an international test match groundsman.” I felt very proud and honoured.

"There are some amazing groundsman whom I admire, but in particular I admire those who have supported me throughout my career by sharing their knowledge and giving me opportunities, including: Tim Packwood (Worcestershire County Cricket Club), Gary Barwell (Warwickshire County Cricket Club), Dan Ratling (Whitgift School) and Karl Standley (Wembley Stadium), as well as Steven Dipple who was the groundsman who first got me into the industry.