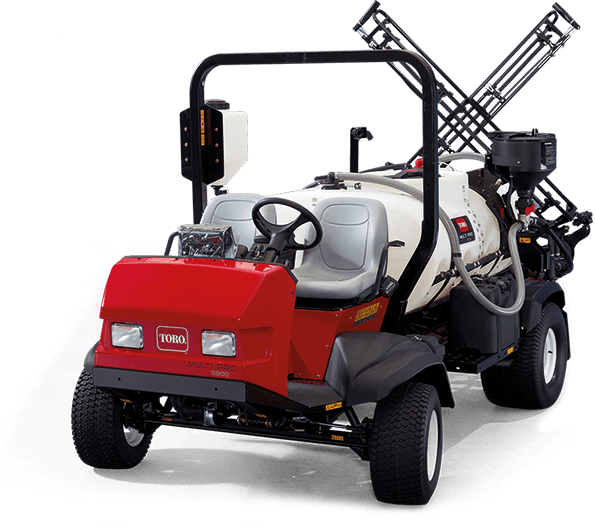 Easy on the turf but still a match for tougher terrain?

When evaluating a dedicated turf sprayer, it is all too easy to assume the unit will appeal only to those operating over fine level turf, and that a light footprint will outweigh any concerns over traction and the ability to cope with undulating terrain. So how does a Toro Multi Pro 5800-D perform over steeper ground when the going is hampered by damp conditions?

Choosing a dedicated turf sprayer calls for attention to both the vehicle and sprayer itself. Good traction and a light footprint are obviously important for the vehicle. As to the sprayer, it has to be accurate, reliable and straightforward to operate. It’s the details, however, that also count. How easy is the sprayer to calibrate? How dependable is the system employed to flush the tank and spray lines between jobs? Can the pump cope with heavy suspensions that need constant agitation? Are the booms built so a minor knock doesn’t lead to a major repair? Can you choose options to suit your specific needs?

With the Multi Pro 5800-D, Toro has all these basics covered. It will tick the box of most end users’ needs. Add a few key options such as an induction hopper or foam marker system and the same machine can be specified to meet more specialist demands in an affordable, but fully integrated package.

The dedicated sprayer divides into two distinct elements, the traction unit and the sprayer itself. It is pretty obvious that only when the combination of the two work well together that the machine in question delivers as a dedicated machine, particularly when working conditions are more demanding than the ideal. Applying expensive materials to level turf with accuracy is a given. Doing the same over undulating terrain, where vehicle traction may be at a premium, is quite another.

Over undulating ground, such as a golf fairway or along the banks adjacent to a playing field, wheels that break traction not only damage the turf, but can also lead to vehicle instability, particularly when working laterally along a slope. A ‘tractor’ unit that cannot be trusted over more challenging terrain is hardly likely to make it as a versatile sprayer many end users now demand.

With this in mind, job one was to put the 5800-D to the slope and traction test as typified by the steep land set aside as a practice ground. The practice tee is approached by a 20 degree slope, damp conditions endowing it with a less than grippy surface that could challenge a two-wheel drive utility.

To be honest, the Toro 5800-D dismissed this challenge with such ease that it wasn’t worth carrying on. This vehicle easily demonstrated it would cope on undulating ground safely and without breaking traction. Out of courtesy we did not drive the unit over the practice green, but it was also obvious that the sprayer was light on its feet too.

Another interesting feature is the main spray pump, a six-diaphragm unit rated at a considerable 151 l/min (40gpm) capacity. This sort of output is more typically related to a far higher capacity unit than demanded by the triple-section 5.64m (18ft 5in) booms. The reasoning behind the high pump capacity is to allow for constant aggressive tank content agitation, with no compromise on flow to the nozzles. This will please those tasked with applying materials that can need to be kept moving to stop a suspension settling out in the base of the spray tank.

Those familiar with the Multi Pro series will know these models are offered with the proven Toro Pro Control XP spray control system option. A key feature was the unit’s ease of operation, a dedicated push button control offering eight pre-programmed calibration rates to suit most common applications.

Now comes arguably the most important element of the sprayer, the boom. The two outer sections are folded hydraulically, the same rams allowing the operator to manually pivot the boom sections to accommodate sloping terrain. For most this level of control will suffice, but for those working routinely over undulating terrain, an Ultra Sonic Boom Levelling kit can also be fitted. The latter, again fitted to the test unit, monitors the height of the boom tip from the ground, raising or lowering it automatically to accommodate changes in slope.

The booms are heavy-duty units that are equipped with a two-way break back system that would not look out of place on a unit of twice the width. The triangular profile of the boom protects the three nozzle head from accidental knocks. Grease points at the pivots lubricate joints protected by gaiters. Even the supports that hold the booms in place in transport are mounted on vertical springs to dampen out shock loads should the booms catch something.

There is no need to get off to fold or extend the boom sections, the same rams that do the folding also allow each section to be raised or lowered manually to follow undulating terrain.

Forming an integral part of the central armrest, the Info Center provides access to flow rates, nozzle selection, tank contents and all key operating data and according to James, it could not be easier to use.

Powered by a separate electric pump and including dual tank rinse nozzles, the clean water cleaning system will be a real productivity aid, allowing the rinse and cleaning process to be carried out between main tank refills.

The Ultra Sonic Boom Levelling is well worth having for use in steep terrain, ensuring both spray accuracy and reducing the chance of the boom tips hitting sloping ground.

The Multi Pro 5800-D comes across as rugged and built for hard work but without excess weight.

The industry’s first turf-based spray system is now available for our customers. Toro’s GeoLink Precision Spray System is a GPS equipped sprayer available for use with the Toro Multi Pro 5800 and 1750. GPS technology and a single nozzle level control means application is accurate to within 10mm. The system automatically turns individual sprinklers on and off based on the machine’s exact location and the boundaries set, and thus virtually eliminates waste.

To sum up, the Multi Pro 5800-D comes across as rugged and built for hard work but without excess weight. The simplicity of working the Info Center control system is a real plus and one that should help ensure repeated spraying accuracy too.

Boringdon Park Golf Club Rises from The Ashes With...