After taking on the maintenance of an additional stadium, Southampton Football Club is continuing its 16-year relationship with TYM Tractors and has invested in a new T503 tractor to help with the extra workload.

A new partnership between Southampton Football Club and AFC Totton has seen the Saints’ women’s team play their home games and train at AFC Totton’s Testwood Stadium this year, and as a result Southampton FC’s grounds team has taken on the site’s maintenance.

Andy Gray, Southampton FC’s grounds manager, explains: “Taking over maintenance of the new stadium, alongside our own St Mary’s Stadium and Staplewood training ground is certainly a challenge, which is why we’ve invested in a new TYM Tractor to help take on the task.”

The new T503 joins three other T503 mid-duty tractors which have recently been replaced like-for-like, and added three new T293 compact utility tractors, says Andy: “Over the past three years we’ve been updating our fleet and most recently added a T503 for the Testwood Stadium, which brings our fleet of TYM tractors up to seven.

“We updated the fleet with a mix of like-for-like upgrades and new additions because we’ve been using TYM Tractors since 2003 and they’ve never let us down. The T503 is easy to use and as we know from experience, reliable, and the T293 is great because of its compact size – we use it for the smaller daily jobs to reduce the stress on the turf. We’ve definitely seen a big improvement to the grounds because of that.”

And it seems the use of TYM at the club has created somewhat of a buzz locally, says Andy. “Word of mouth has already spread about the quality of the pitch at AFC Totton; we’ve had other clubs in the same league asking us how we maintain it to such a high standard! Of course the answer is always: hard work combined with high quality machinery.”

“Despite the challenge the extra work provides, the whole team are behind the partnership with AFC Totton,” says Andy. “Partly because Testwood Stadium is also used by local community groups and giving them, as well as the women’s team, the best pitch possible is a great way to give back.”

With the Staplewood training ground and Testwood Stadium needing maintenance on a near-daily basis, the TYM tractors are in constant use carrying out a variety of jobs.

"The TYM tractors work perfectly for the jobs we need them to do, from seeding and aerating to moving equipment," says Andy. "The icing on the cake is the service from Reesink Turfcare. They only deal with the best machinery brands and are always able to get us what we need. As well as TYM, we've been using Toro - which Reesink distributes in the UK - for 20 years, and that's not likely to change."

Scott Turner, TYM regional sales manager from Reesink, adds: “We are very proud to have a long-term working partnership with Andy and his team, in addition to DJ Scott Garden Machinery who first supplied TYM to the club and, since Reesink took over distribution, have provided them excellent servicing and maintenance. The TYM fleet Southampton FC has invested in has proved to be a great benefit to their multiple sites and we look forward to continuing this relationship and providing support in the future.” 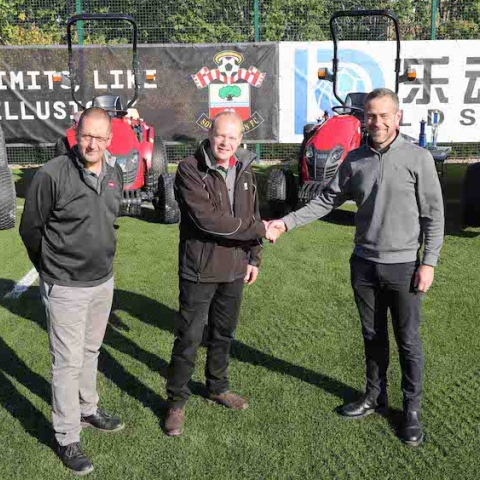 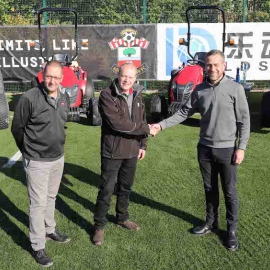