TYM Brought In To Help With Ambitious Masterplan For Oundle School

One of the UK’s leading independent schools, Oundle School in the quintessentially English market town of Oundle, near Peterborough, has brought in three new TYM tractors to help with its ambitious Sports Development MasterPlan.

The aim of the Sports Development MasterPlan is to ensure that there is sufficient provision and diversity of high quality sporting facilities to cater for the School’s 1,350 pupils. Nick Tebbs, Head of Grounds and Gardens who has been at Oundle for 26 years, explains:

“It is the intention to carry out a drainage and levelling exercise across all the school’s pitches over the next few years. In support of cricket, which along with rugby is played by girls as well as boys, the School has recently built a new Cricket Pavilion, and the 1st XI outfield has been laser levelled and drained. New practice nets have been built in an enclosure with ten natural and ten artificial turf practice strips. This runs alongside the development of two new Astroturf pitches, and when these are completed, the existing natural turf hockey pitches can be used for rugby and football. The Development MasterPlan also includes the construction of twelve netball courts and an indoor eight court sports centre with a 50m swimming pool.”

It was with these plans in mind that the School decided to replace its old agricultural and industrial tractors with two 50hp TYM T503s, both with cabs and one with hydrostatic transmission, and a 35hp T353.

Nick tells us: “We were looking for well-equipped tractors that were mechanically robust with proven components and well thought out operator platforms. The two 50hp tractors replace a 1987 MF40E and 1984 MF240. They will be used for heavy tasks such pulling three and five unit trailed gangs, spiking and loader work.”

TYM compared well against competitor brands on a like-for-like specification says Nick, and Lely Turfcare “presented a sound ‘Total Cost of Ownership’ package”. With a major regeneration project of the 11-acre Heron Rogers Wood also underway, these TYMs will be earning their keep ensuring this, the only woodland area within the parish boundaries, remains a much-valued green space for the town not just the school.

The regeneration of the wood, which was left unmanaged for a number of years, will see the planting of 60 percent of major tree species such as oak, birch, cherry and sycamore, and 40 percent as minor species of holly, yew, field maple and crab apple, as well as additional shrub species. Woodland floor plants will be introduced, and habitat creation projects in order to increase insect life.

The replanting scheme will complement other conservation areas on the School‘s 250-acre estate, which is scattered around the town of Oundle, including the Laxton Junior School pond conservation area, and the SciTec pond and grassy bank. There is also a proposal for woodland to be expanded into a neighbouring field to further encourage wildlife diversity.

It was considering this work that “both the T503 tractors were fitted with fore-end loaders for additional versatility and to enable easy programming of work between the grounds and gardens requirements”, says Nick. “The T353 will mainly be responsible for lighter sports surface work, winter turf and garden maintenance and the general presentation of the school campus,” he adds.

These are big plans, but with 22 full-time staff, including eight grounds staff and 13 gardeners, plus three new TYMs, they are achievable and allow Oundle School to not only provide the best sporting facilities possible for its pupils, but provide a valued green space for generations to come. 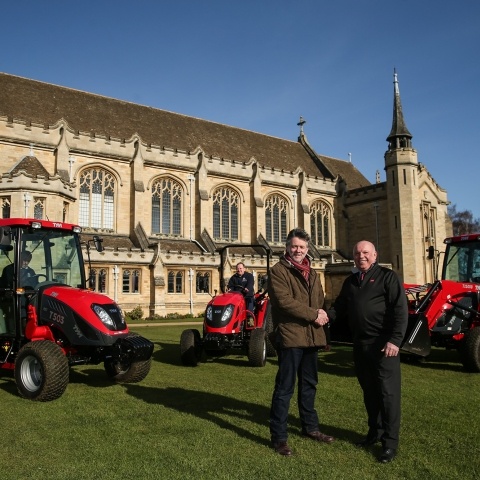 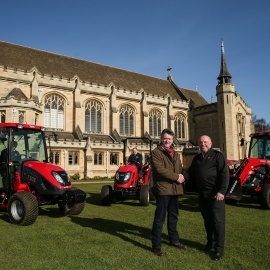