Home  >   News  >   New Course Manager, First Ever Package Deal And A Rebrand, It's All Change For The Henley

New Course Manager, First Ever Package Deal And A Rebrand, It's All Change For The Henley

The Henley, which until recently was known as Henley Golf and Country Club, is entering a new period of its young life. A new name as part of a comprehensive rebrand, a new course manager and its first ever machinery package deal with Toro sees this 250 acre club with a new and determined focus to achieve its full potential.

Overlooking the historic town of Henley-in-Arden, Adam Moss, course manager, joined the club eight months ago to a rather empty shed and a course that was some way off reaching its potential.
“Established in 1994, this is a young course, which for one reason or another hasn’t been pushed. There’s a lot of potential in these 250 acres and 18-holes and my job is to help realise that potential,” he says. “There wasn’t the proper equipment to do a good job to start with; in fact when I first went into the shed I wondered where all the equipment had gone!”

The aim is to create a premier facility and with that in mind, Adam looked into new machinery to suit the parkland course. “We have a five-year plan with the aim to create a premier golf club for the Midlands. We needed machines that would suit the site and bring out the best in it. Having used Toro before I was confident they could cope with its challenges and I could rely on them to help get the job done.”
The 28-strong fleet is made up of greens, grounds and fairway mowers, aeration equipment, UTVs, sprayers and two ever-popular TYM T503 Tractors. Advising Adam on the mix of machinery was Lely Turfcare’s Jon Lewis, who Adam complements, along with local dealer Redtech, with providing sound advice, good customer care and a comprehensive demo with a trained demonstration team.
“The demo proved me right that Toro was what we needed to get the course back on track. The quality was evident and when we coupled that with the support from Lely and Redtech, to be honest, no one else came close.”

Among the fleet is a Groundsmaster 360, with ProForce Blower, an unusual machinery choice maybe for a golf course, but which, says Adam, deals with the parkland aspect of the course with ease. “It’s a nimble machine and with its joystick mount is really easy to operate in between and around the trees. The blower has enough power to deal with the vast area, which gets covered in leaves.

“We also made the decision to invest in three aerators, two ProCore 648s and a wide area SR72. The ground was really compacted and we needed to remove a substantial layer of thatch; the aerators have been worth their weight in gold doing this.”

Energy-efficiency played a part in five of the deal’s machinery choices. Adam explains: “We bought three Greensmaster TriFlex 3420s and two Reelmaster 5010-Hs. These models are hybrids and together ensure we have an energy-efficient, green option, for the cutting of our greens and fairways.”

“With new legislation coming into play in a few years Lely Turfcare’s Jon Lewis advised us to consider this now so we don’t need to worry about it nearer the time. The fact that both models are efficient and effective at what they do sealed the deal. In particular the 5010-H has performed incredibly well, reducing fairway cutting time in half and making us a substantial saving in fuel.”
It’s not only entering a new period of its life, with Adam and Toro, The Henley is also getting a new lease of life! 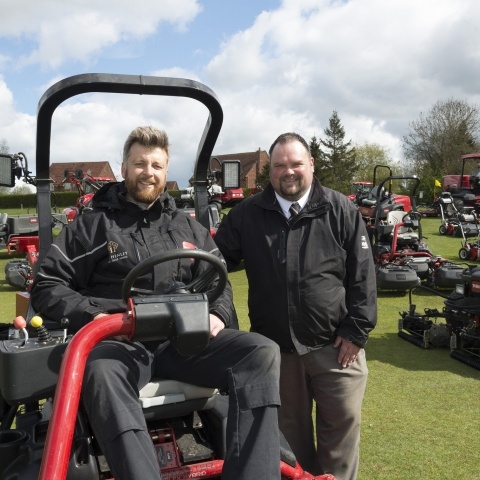 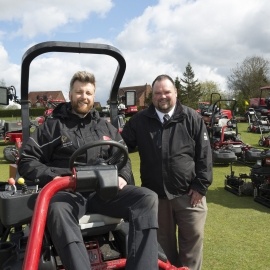 Adam Moss, The Henley’s course manager, seated on the left, with Lely’s Jon Lewis.
View all news View our products