Man City benefits from upgraded irrigation system, thanks to investment in Toro

Etihad Stadium – the home ground of Premier League football club Manchester City –recently upgraded its irrigation system with the installation of 16 Toro R Series conversion assemblies. Installed with new artificial turf covers around the perimeter of the pitch, the football stadium has cost-effectively upgraded its existing sprinklers by replacing the sprinkler internals - along with some of the nozzles to ensure no water waste - and kept the existing body and piping system intact.

Etihad Stadium head groundsman Lee Jackson explains the reasons behind the upgrade: “There were no issues with the previous sprinklers we used, however, after seeing a demo of the new Toro conversions kits in July 2014, I was impressed with the fact that there is no stopping point at the edge of each arc. This maximises water getting onto the pitch itself and not ‘puddling’ on the perimeter.”

“The sprinklers themselves are also on a faster movement meaning quick watering of a full arc when time is restricted is now an additional possibility,” he adds.

While Lee says there are no plans to invest further into the club’s irrigation system at present, he does admit that he will be keeping an eye out for new industry advancements. “It would be remiss of me in my job not to look at new products, hence the purchase of the conversion kits, as nothing stands still in any industry and in groundscare it’s certainly no different. Anything that can improve what you already have should be seriously looked at where practically possible.”

Picture: Man Cityhead groundsman Lee Jackson with Lely’s Robert Jackson on the left in front of the club’s new Toro sprinklers at the Ethiad Stadium 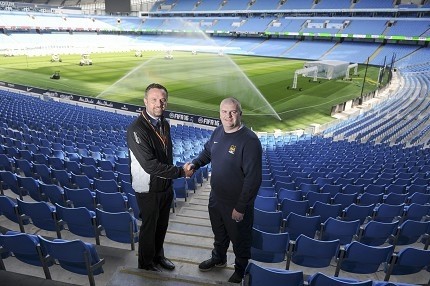 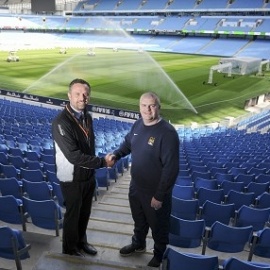 A Sprinkling of Investment for Football League DebutRead more